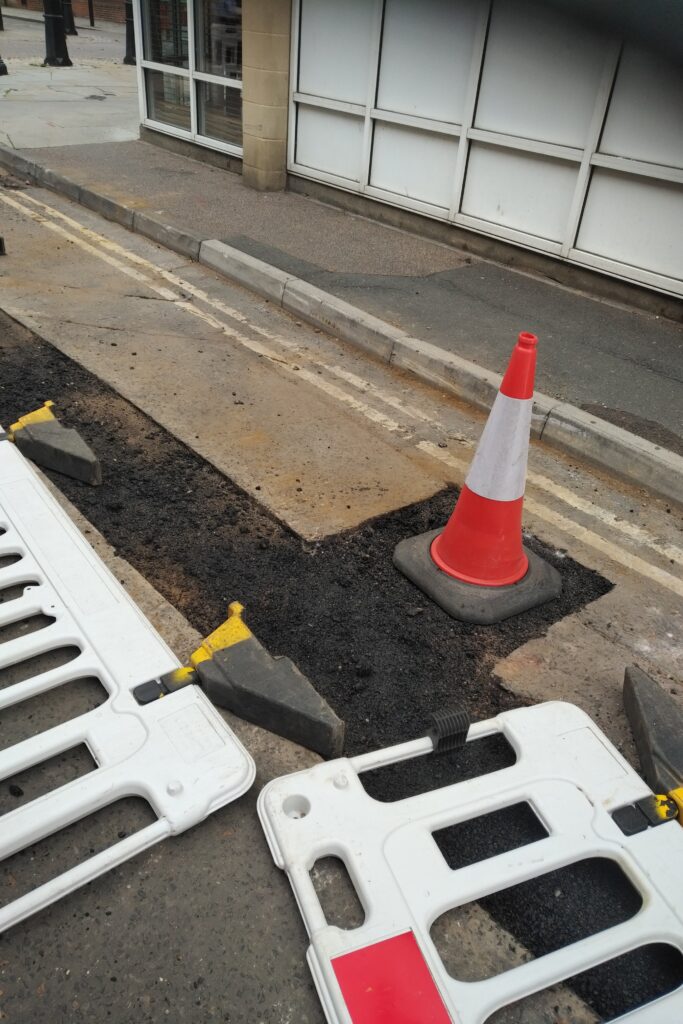 25 MayIt’s all the contractor’s fault…

This is a sentiment we still hear from some undertaker clients when they find themselves in a New Roads and Street Works Act 1991 (“NRSWA”) related muddle and in need of our assistance.

Whilst it may be an understandable sentiment from an undertaker, it is not one that always gets one anywhere.

Within this article what we want to do is:

Notwithstanding the title of this article, parts of it may be as applicable to undertakers with their own direct labour teams as those using contractors.

Although it may be the contractor’s acts and/or omissions that gave rise to the NRSWA muddle, legal liability for the outcome of any such muddle invariably sits firmly with the undertaker for NRSWA purposes. As a result it will be the undertaker and not the contractor:

It is only in respect of the two criminal offences created by the Traffic Management Permit Scheme (England) Regulations 2007 that a permit scheme authority might consider raising a FPN or related criminal prosecution against a contractor in place of the undertaker itself. It has also been notable that authorities have generally proven reluctant to exercise their ability to pursue contractors for those offences, either by means of FPN or criminal prosecution, when they may have the undertaker ‘on the hook’ for them in any event.

Contractual counter-measures and their limitations

With liability to NRSWA criminal prosecution and/or civil claims sitting firmly on the shoulders of the undertaker, it makes sense for the undertaker to have express agreed contractual:

Point 1 above is one that can occasionally take one in circles within a NRSWA context. This is best exemplified by the occasional response to the question “what were you doing to ensure NRSWA compliance?” being “we were paying the contractor to do that”. Viewed solely within a contractual context, that answer may make sense. Viewed within the context of NRSWA liabilities sitting solely on the undertaker’s shoulders, that answer may fall somewhat short. It is also an explanation that may fall even shorter on each occasion that the same contractor is the cause for the undertaker having another trip to a Magistrates’ Court for another alleged criminal breach of NRSWA. The Magistrates will want to know what you as an undertaker are doing to make sure the contractor isn’t getting things wrong, rather than hearing how the contractor may be repeatedly getting the same thing wrong (despite your paying them to get it right).

In respect of point 2 above, it is the undertaker’s name that may be press released by the prosecution and appear in the local “Bugle and Gazette” paper in the crime pages in the event of a NRSWA criminal conviction being received. Rarely would one ever see the contractor’s name in print in the same context.

As for point 3 above, this is particularly relevant where the amount of financial penalty imposed on the undertaker may be beyond the means of the contractor to pay out on any indemnity it has given. This has possibly become more of a risk with the increasing levels of fines the Courts have been imposing over recent years for NRSWA offences, especially when combined with the tight profit margins that some contracting sectors operate on. It is also the case that some contractors may legitimately challenge the basis of an indemnity claim for an alleged breach of warranty. It is therefore not guaranteed that an undertaker will always recover amounts it believes are due to it from contractors, even where contractual counter measures are in place.

When considering the issue of recovery under any indemnity, there is another feature of the utilities sector to consider. That is the ‘many linked’ length of the contractual chain that may exist between the undertaker and the contractor doing the actual work giving rise to the problem. It is common that there is a string of ‘back to back’ warranties and indemnities from the undertaker down to the furthest contractor. Those ‘back to back’ warranties and indemnities may however sometimes create a false sense of security for all parties by seemingly shifting ‘problems’ ever further away.

So, having said what we have above, what’s the solution?

The contracting model is undoubtedly with us for the foreseeable, so we can forget any Elysian pipe dream of all works being undertaken by direct labour (good luck getting that model through a regulatory settlement or past an institutional investor…). It isn’t even as if direct labour would eliminate the problems in any event, as any undertaker with its own direct labour teams will confirm. The same NRSWA muddles are common to both models.

As alluded to above, one of the possible consequences of the contracting model is that it may provide a false sense to both undertakers and their contractors of NRSWA compliance responsibilities sitting ‘somewhere else’ in the contractual chain. The same risk may also however be present within an undertaker with direct labour where that direct labour sits within various different isolated ‘silos’. It is obviously the case that any part of the chain, whether it’s internal within the undertaker or external contractors, may trigger a problem that results in NRSWA liabilities being acquired by the undertaker. It is also the case that any link in the chain ‘dropping the ball’ they are responsible for can have knock on consequences elsewhere within the chain, causing other balls to be dropped and additional NRSWA liabilities to be acquired.

As local authorities come under increasing financial pressure, NRSWA related charges and penalties may (have?) become ever more a daily and increasing feature. Given that undertakers may have significant amounts of turnover and profits, it is possibly unsurprising that authorities might focus their attention on them. Whilst some NRSWA charges and penalties might be considered avoidable (such as: prosecutions; FPNs; and s.74 charges), others are starting to have the character of taxation – think permit fees, lane rental etc.

Although NRSWA criminal prosecutions may be relatively rare, particularly where imposing FPNs is more financially advantageous to authorities, when they do arise the consequences will almost certainly be greater than the sum of any fine that might be imposed by the Court upon conviction. Even on the financial side, the uncapping of fine levels for many NRSWA offences does mean even first offence fines can be a significant sum of money.

An undertaker should of course have appropriate contractual warranties and indemnities in place with contractors. However, don’t make the mistake of thinking they are the solution. They are certainly part of it but on their own won’t prevent problems from arising nor guarantee that the undertaker will be reimbursed the value of any loss/damage that might result from any contractor breaches.

With a significant proportion of the road system in England having originally been built by the Romans, the reputed advice from the Emperor Honorius to his distressed Romano-British subjects in 410 AD telling them to “See to your own defences” seems as apt for undertakers today pondering their potential NRSWA liabilities as it was to Romano-Britons (albeit the advice was given in a significantly different context!). If contractual warranties and indemnities are only part of the defences (and relatively passive elements at that) we advise that an undertaker take the following additional active measures to mitigate its potential NRSWA civil and criminal liabilities:

And for all those who believe they are already doing all of the above, here’s a picture that may take some people back a few years (20 or so years to be precise). This particular copy of that out-of-date Code of Practice was one ‘liberated’ by the writer from an attendee at a training session delivered a few years after the 3rd edition of that particular Code of Practice had come into force. Its owner had been unaware that he (and presumably every site he had set up for some years) was two editions of the Code of Practice out of date. He was a direct employee and not contractor staff for that particular undertaker…

If you want to know more about our work in this area and whether we maybe able to assist you  contact us.